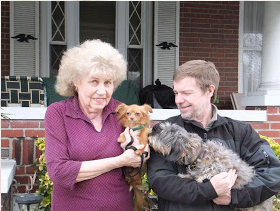 Like many blood trackers I have always gotten several phone calls a year asking whether my dog could find a lost pet.  In the past few years I’ve been called about lost cats, dogs, horses, and even a pet chicken.  I’ve never taken any of these calls.  Never even given them much serious thought before but after a couple of interesting requests this past fall I decided to seriously pursue the tracking of lost pets.  As I researched the project I quickly found out that there is a whole lot more to recovering lost pets than just the tracking.  I still have a ton to learn about the whole process but this is the story of my first attempt.

The first thing I needed to know was if my blood tracking dog Eibe would even follow a healthy dog.  To do this I had my kennel staff take 3 dogs from my boarding kennel, give them a walk across a field, and let the lines age.  After an hour I took a piece of the blanket from one of the dogs, Target Dog 1, and used it to pre-scent Eibe.  This blanket had only the scent of Target Dog 1 on it.  Pre-scenting indicates to the tracking dog what scent you want her to find and follow.   To get started I just used the usual routine I would use at the hit site of a wounded deer call.   I put a piece of the blanket in an open plastic bag on the ground and treated it like the point of impact where Eibe would normally smell the blood and hair at the hit site.  As you can see in the diagram I started Eibe 50 yards upwind of the 3 lines and told her to “search”.  All these skills and routines Eibe was already proficient  at.  Eibe effortlessly searched across and ignored the first two decoy lines, hit the third target dog line and engaged it with no problem.  She followed it a short 100 yard distance to the end where I had some meat laying as a reward.  The next day after the lines had aged 24 hours I took the blanket from Target Dog 2 and did the same thing.  I was curious to see how the scent lines  would hold and whether or not Eibe would engage the correct line or just go to where the meat was the day before.  Again from the diagram you can see she had no problem.  In some ways I was surprised how easy it was but in other ways I was not.  Differentiating one dog from another is not really any different than one deer from another. 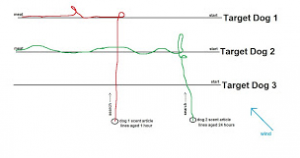 Knowing now that my dog would track a dog, I started watching the local Lost & Found ads for a real life lost dog to track.  I finally found one that sounded promising.  After speaking to the dog’s owner I was able to put Eibe on the trail 2 days after the dog escaped into a suburban neighborhood from a shopping center.  The six-pound Chihuahua called Penny got spooked as the owner left a pet shop in a strip mall. The collar broke and Penny ran off into a neighborhood and quickly disappeared.  My first guess was that the very scared little dog would not be far away, likely huddled under a porch somewhere, scared to death and hopefully easy for us to find.  I had an exact path  reported by the owner that the dog took between two office buildings before she disappeared so I used that as a starting point.

I started Eibe 50 yards up wind, perpendicular to the dog’s line of travel and told her to “Search” after pre-scenting her the same way I had done in practice.  When her head whipped to the left exactly where the dog had run, I knew we were on the right trail.  Everything seemed great.  Just like my practice test with the three kennel dogs she had no problem picking it up.  But after about 5 minutes I ran into my first problem when Eibe began to lose drive.  It was pretty clear to me that she was kind of wondering why we were following this scent.  In blood tracking I am sure a big part of her motivation is the hunt and prey drive.  The thought of tearing into the dead quarry at the end.  The scent of a dog clearly didn’t elicit the same motivation and my very brief kennel dog test had not provided any alternative motivation to any great extent.  I just kept verbally encouraging her and re-presenting the scent article which was Penny’s broken collar that I had in a Ziploc bag.  After about 45 minutes of occasionally coaxing and encouraging her she seemed to finally realize what I wanted and started working the suburban streets and lawns just like when we track deer in the woods.  We have often tracked deer through neighborhoods so this was not completely foreign terrain to her.  The track was erratic in direction at first but at one point scenting became much easier and the track went straight for over a mile.  When I punched the dog’s home address into my GPS, it appeared the dog was heading straight home just like a wounded deer heading back to his bedding area.

The next problem I ran into turned out not to be a problem at all.  Actually I learned from it.  As we approached a big four lane busy Boulevard I wondered how we would track across it with all the cars moving.  I was concerned that picking Eibe up and starting on the other side, like crossing a highway when blood tracking deer, would interrupt the fragile drive I had built to continue tracking this new quarry.  To my surprise, Eibe sped up and flew across the boulevard  and the next two we had to cross as well. After tracking Penny three more times over the next two weeks I was able to confirm my initial suspicions of why Eibe sped up at certain places.  When Penny was spooked or chased, she put off more scent, perhaps “fear” scent just like very hurt vs. mildly hurt deer do, and Eibe could pick up on this fear scent much more easily.  Just like she does with wounded deer.  My 1st day of tracking Penny ended after 3 ½ hours of tracking Penny over 2 miles.  It appeared that someone had either chased her into an industrial park and almost caught her, or perhaps she was caught and put in a car.  Eibe had excitedly tracked into a tight corner of the Industrial park fencing but as she worked the scent out of the tight corner it faded away over the next ½ mile and completely dried up at an intersection to a very busy main road.

It was interesting to see when Eibe lost the trail at the busy intersection how she acted just like she does on a deer call when the scent gets sparse.  When struggling at the intersection where the scent dried up she first searched for a back track and finding none she went a half mile back to the industrial park where the scent was very intense.  Eibe would have re-tracked the last part of the trail again looking for a new direction but at that point I called it a day.  When I started the track I had hoped that Penny would have tucked herself in somewhere safe shortly after she escaped but that obviously hadn’t happened.  Being that we were two days behind her escape and having tracked Penny two miles from where she was initially lost there was little point in continuing that day.

Penny’s owner had posted small flyers in the area where she was initially lost the day she escaped.  The next step after I got involved was to expand the advertising. I found a family member of Penny’s who was an IT guy so he took care of all the lost dog websites and Facebook.  I went to work and created 10 large, 18” x 24” neon posters and placed them strategically in the area where I believed Penny was last chased or picked up hoping to generate a lead.  Over the next few days I put out 20 more posters encircling  the likely area Penny might be in. 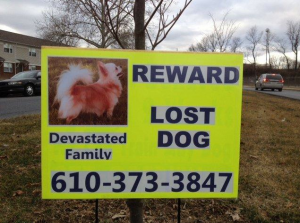 On day 7 we finally got a call from a sighting in an unlikely area that would have matched the theory she was picked up in a car, transported away and perhaps escaped again or was let go.  Crazy things can happen.  I met with the person who called and found out the sighting was from 3-4 days before,  When I took Eibe  to confirm the sighting I also found two more witnesses who reported seeing a dog like Penny two days before in the same area.  Interestingly while checking this location I saw two other long haired Chihuahuas being walked on leashes and about 10 more Chihuahuas of various types in yards and front windows.  This inner city neighborhood was crawling with Chihuahuas!

To confirm a sighting I first got detailed information from the witness as to where exactly the subject dog was seen.  I then tried to go 50+ yards upwind if possible and started Eibe at a location where I was pretty sure the subject dog had not been present according to the witness.  I then pre-scented Eibe and directed her to search in a direction perpendicular to the reported line of travel of the subject dog.  If Eibe picked up a line and started tracking where the witness reported the dog,  it was a positive confirmation.  If she didn’t pick up the line after several attempts, the sighting was not confirmed.  After several unsuccessful attempts to pick up a line I determined that the long haired red Chihuahua seen by the witnesses was not Penny.

2 thoughts on “A New Kind of Find. Andy and Eibe Get to Track a Lost Dog”

We took a very independent strong minded dog that had a very strong tendency to bite when anyone tried to discipline her and enrolled her into their obedience classes. We are extremely satisfied with the service and are telling and showing everyone our great lovable dog.
T.T.Saint Clair
more testimonials...